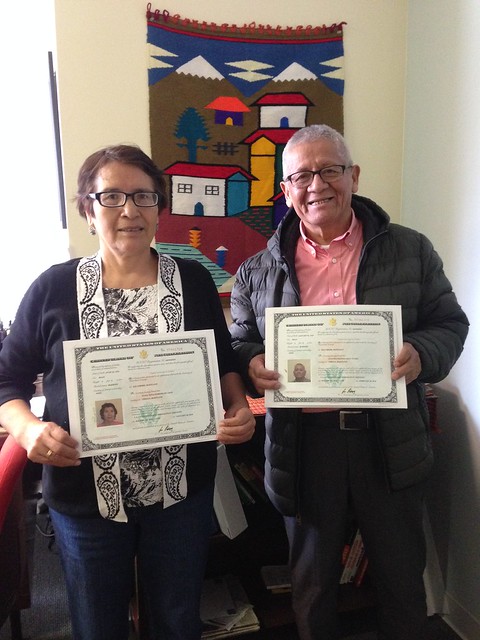 I had asked the two whether the citizenship test or 40 years of marriage was more challenging.  As his wife finished answering, Augurio shot her an ornery glance and added “It’s hard to say which is more difficult.”

Juana and Augurio met in Lima, Peru in the 70s.   They were friends, but it was Juana’s special blend of extreme optimism coupled with her practical, down-to-earth nature that caught Augurio’s eye.   “She was so positive, but not one of those women you throw money at to impress.  On a date, I offered to get us a taxi, but she said she was fine taking the bus.  There was something different about her, about how she saw things in the world.”  Augurio says that it is Juana’s optimism that drives her to make ambitious plans, while he tends to be a more cautious decision-maker, focusing more on the finance and the risks.

“I’ll give you an example,” he said.  “In October, for our 40th anniversary, she wanted to go away, but I always said “No,no, it’s so much money, and I can’t just take off work all the time.” But that weekend, she said, “Get your bag”, and I discovered that she had done everything under the table!  The tickets, the hotel, she even went to my boss to request time off for me! ”   Juana grinned to herself, and said, “He is worried about money, but I always tell him that we can’t take it with us, so we have to decide together to invest it wisely now.”

One of the investments they decided to make together was in U.S. citizenship.  Juana was ready to apply, but Augurio had his doubts.  She says “He was so nervous, saying, ‘What for?  I won’t be able to pass!”  At $680 for each application, it was no small decision, but they explained, “We decided to invest the money and to study.  It was important that we made the decision together, because it is an expensive investment. But in the end, we wanted to more fully belong to this country, because it is our home.  We want to vote, and we want to bring the rest of our family so that we can all be together”

Once the decision was made, each pushed the other towards success.  Juana is more comfortable in English, but introverted, whereas Augurio is gregarious, but struggled with comprehension.   Juana’s boss helped her find CARECEN’s citizenship classes, and they enrolled in two sessions of class to prepare for the exam.  After turning in their applications, they began to focus even more on their English, and traded relaxing weekends for study dates.  Juana would book a room at the Mt. Pleasant library, and the couple would spend the day dictating sentences to each other to improve their written English, and watching YouTube videos of interview simulations to improve their comprehension.

In January, their hard work paid off.  Juana said, “The officer finished the interview and said ‘Congratulations’.  That is what you wait for, after all that studying.  To hear the official say that word is an incredible moment.”   While Augurio’s interview was first, his naturalization ceremony was cancelled due to a blizzard, and Juana became the first of the pair to be sworn in as a U.S. citizen.   Augurio teased her, saying “You tricked me!  I thought we were doing this together, but you beat me to it!”   Just days later, Augurio was sworn in as well. 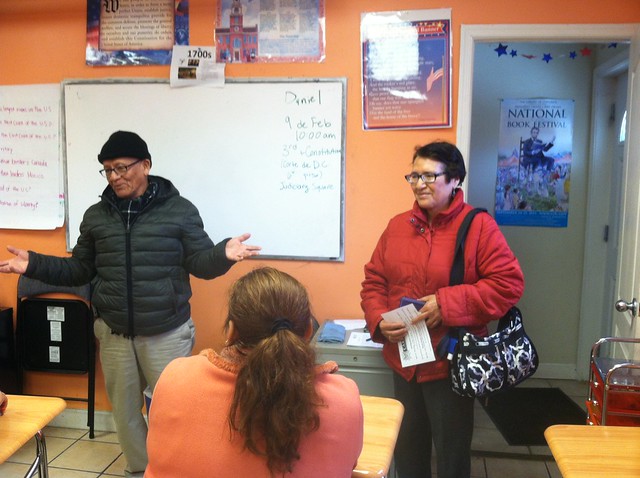 Earlier this week, Juana and Augurio returned to CARECEN to show off their certificates of naturalization and speak to their former classmates.  Augurio offered words of encouragement, stating, “If we can do it, you can too. I wasn’t sure it was possible, but thanks to CARECEN, the classes, the teachers, and my wife, today we are celebrating 40 years of marriage and one day of citizenship.”

In the 10 years that remain until their Golden Anniversary, the couple hopes to vote in upcoming elections elections, travel, enjoy their grandchildren and great-grandchildren, and continue to reunite their family through petitions.  They aren’t sure what adventures lay ahead, but are excited to share their next 10 years as naturalized U.S. citizens.

Congratulations to Juana, Augurio, and all of our newly naturalized citizens, and Happy Valentine’s Day! 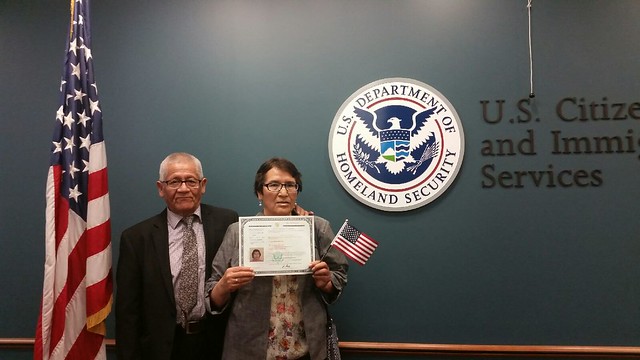