Stories and news from within and about our community to provide knowledge as well as celebrate the journey and accomplishments of our organization and those we support. 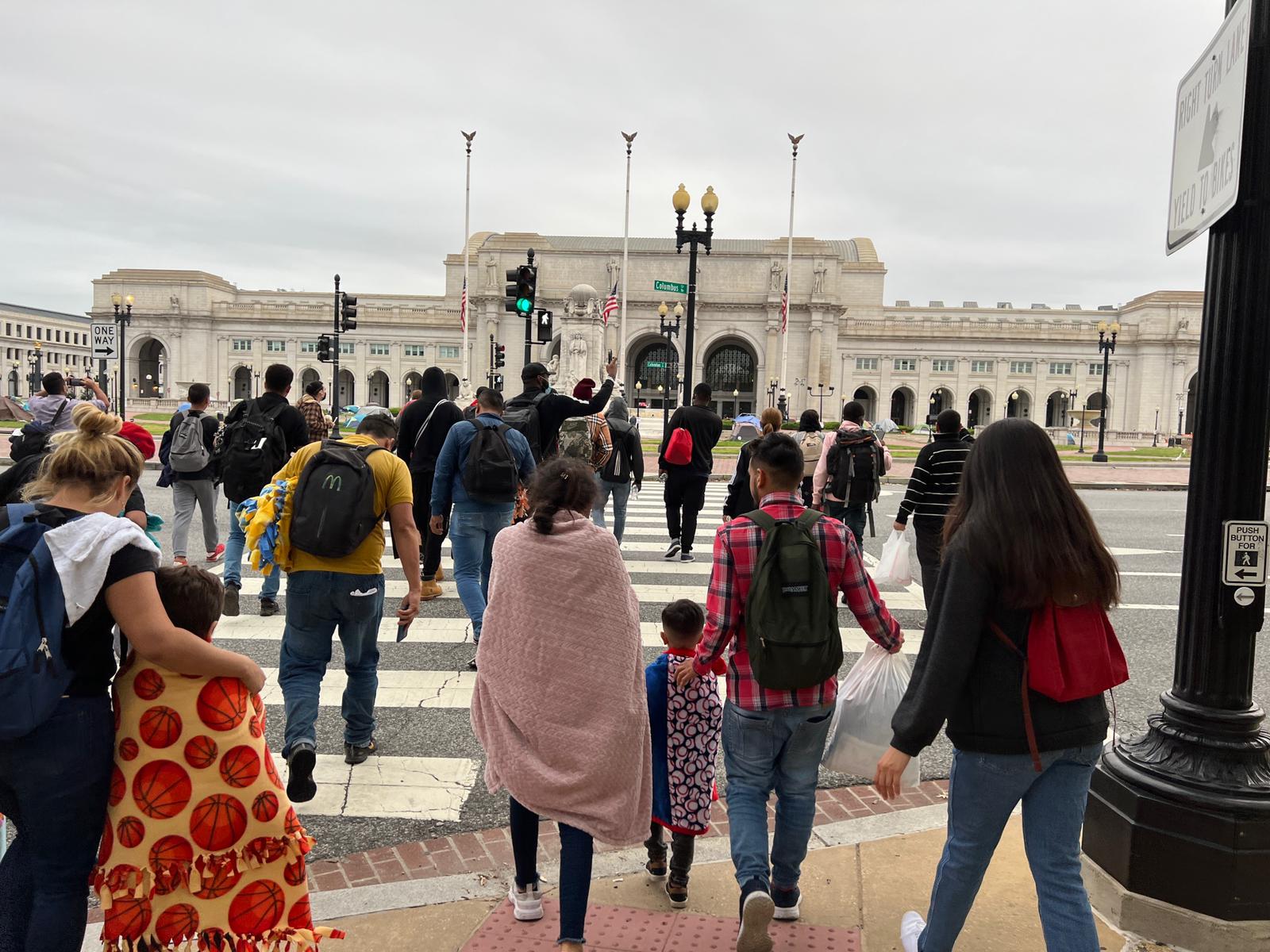 For the past four months, Washington D.C., has been receiving buses from Texas and Arizona with migrants and asylum-seekers. The vast majority of these people are originally from Venezuela, Nicaragua, Cuba and Colombia. In a smaller but very important number to recognize, people have arrived from African countries such as Angola, Congo, Mali and Nigeria. For some, the DMV is their final destination. Here, family or friends await them. For others, it is one more stop in their journey to NYC, New Jersey or Boston. But there are also those who came to D.C. because they have nowhere else to go, and no one to help them.

The first bus arrived on April 13, 2022, from Texas. Since then, buses have arrived almost every day, each carrying 25 to 40 people. Texas Governor Greg Abbott has provided these buses as part of a plan to “bring the border” to Washington and demonstrate his opposition to the Biden administration’s efforts to eliminate the Title 42 policy. Arizona Governor Doug Ducey has joined this initiative and began sending buses with migrants to Washington in May. However, this strategy has not had the desired effect.

Although the buses drop off migrants in front of Union Station, just blocks from the Capitol, the situation has not had the alarming and unbalancing effect on the Biden administration that perhaps Abbot and Ducey had hoped for. This is due in large part to the immediate response of local organizations and volunteers, who have mobilized resources to assist the people arriving at a new and unfamiliar place after a 32- to 50-hour journey. In this process, CARECEN, who has served migrant communities in the Washington metropolitan area since 1981, has helped coordinate the humanitarian and advocacy efforts to support the migrants arriving on these buses.

Most buses arrive at 6 a.m., some arrive in the afternoon and on some occasions, buses have arrived as late as 11p.m. People arrive tired and hungry. In some cases, people have even arrived with health problems that require immediate attention. CARECEN, together with other organizations and volunteer groups, has coordinated to meet several buses. Many churches have opened their doors to the groups of migrants that have arrived, and members of their congregations have contributed with donations of food and clothing. The response to the buses has not come from the Federal government or the DC Mayor’s Office but from local communities showing their solidarity with migrants and asylum seekers.

After receiving the people, staff members and volunteers complete an intake form with each person traveling alone or with a family group to determine their immediate needs and the next step in their journey. For the vast majority, their final destination is a city on the northeast coast of the country such as NYC, Newark or Boston, but there are many for whom the final destination is still far away. There are people who want to go to cities in Florida, Georgia, Ohio, Kentucky, Maine or even some city on the west coast. The vast majority do not know how to get there and have already run out of money after several weeks or months of travel.

CARECEN, in collaboration with SAMU, Catholic Charities and the Migrant Solidarity Mutual Aid Network, have purchased bus, train or plane tickets for the people arriving in DC so they can be reunited with family or friends.

In this process we have also had the opportunity to witness some very touching family reunions. I remember the case of an elderly man, originally from Cuba, who had come from central New Jersey to wait for his son. He had left his home at 2 a.m. to be outside of Union Station at 6 a.m.  When his son got off the bus, the man shouted his name and ran to hug him. They had not seen each other in years and had waited a long time for this reunion. Those of us who were present were able to witness a miracle; not all families that are separated get the chance to see each other again.

Family reunification remains one of the main causes of migration to the United States, but it is not the only one. Many of the people that CARECEN has received say that the decision to migrate has not been easy, but that due to political instability, lack of employment opportunities, high levels of violence and increasing vulnerability to climate change, they have been forced to flee their home communities in search of a better future. Many of the people we have received are excited to begin their new lives in the United States, yet they still have many obstacles to overcome to fully integrate themselves into U.S. societies. Arriving at their final destination concludes their travels, but not their journey as a migrant in the United States.

“The buses” serve as a snapshot of both the transnational migration journey and the national immigration discussion. As such, it requires a comprehensive response that simultaneously addresses a series of challenges with varying degrees of urgency and magnitude. On the one hand, we must meet immediate needs: we are making runs to the pharmacy to make sure we have diapers in the right size, preparing hundreds of meals and hygiene kits into the late evening, making a last-minute phone call to secure a wheelchair for a child who can’t walk, or running to Union Station to meet a bus that’s arriving in a moment’s notice. On the other hand, we’re reckoning with what it means to be a “Sanctuary City” in practice and our role as individuals and organizations in the American immigration landscape. Though “the buses” are only a small part of the immigration discussion, they represent an opportunity to rethink and redesign the way this nation welcomes newcomers and strengthens our communities.

It is likely that in the coming months Washington will continue to receive buses from Texas and Arizona with migrants. To develop the right infrastructure to assist them, local organizations will need assistance from the Federal and local governments. There is great need for a proper respite center, access to health services and equal access to case management. The DC community has shown our commitment to treating migrants with dignity and respect as they come to our city to build new lives, though our work can only continue with the support of our elected officials. At the same time, as Texas has officially begun sending buses to other states, the call to action extends to individuals and organizations all over the U.S. where newcomers will potentially arrive seeking support from the local community.

This piece was written by Diego Jones, a DC Cares and Legal Program Assistant at CARECEN. Originally from El Salvador, Diego is a human rights advocate with experience working with migrant populations in the United States. Prior to joining CARECEN he worked in Central America facilitating human rights education programs. He has also served as a Jesuit Volunteer- AmeriCorps member providing case management for Latino survivors of domestic violence in Portland, OR. He is currently completing his MA in International Affairs Policy and Analysis at American University